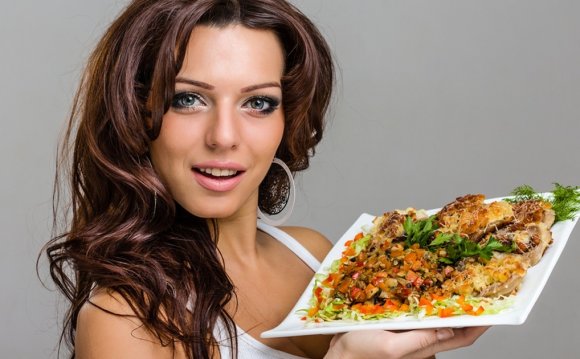 You may have seen claims that low-carb diets work by melting away fat, especially . The thinking has been that because these eating plans lower levels of the hormone insulin, which promotes fat storage, they are the most effective diets to help people lose their muffin tops and spare tires.

Now a new study has laid that theory to waste (and waist.)

Scientists at NIH got 19 overweight adults — 9 women and 10 men — to follow very carefully controlled diets for two 11-day stretches. The study volunteers stayed at the NIH, where they were instructed to eat every morsel of every meal provided to them. For part of these visits, they lived inside a special room called a metabolic chamber, which captured all the air they inhaled and exhaled as well as their urine. This careful collection of body gasses and fluids allows researchers to precisely measure how many calories people are burning and what those calories come from—carbohydrates, fat, or protein.

For the first part of the study, volunteers ate a starting diet designed to keep their weight steady and even out their metabolism. That diet was made up of 50% carbohydrate, 35% fat, and 15% protein. For the next six days, they ate a diet with 30% fewer calories. On the low-carb diet, all those calories were cut by reducing carbs, while protein and fat stayed constant. On the low-fat diet, all those calories were cut by eliminating fat, while protein and carbs stayed steady. All 19 people followed both diets with a break of a few weeks in between.

The results were surprising. People lost more total fat on the low-fat diet than they did when they were eating the low-carb diet. And cutting fat didn’t appear to slow metabolism, while cutting carbs did.

What does all this mean for weight loss in real life? Unfortunately, not much. We spoke to study author Kevin Hall, PhD, a senior investigator in the laboratory of biological modeling at the National Institute of Diabetes and Digestive and Kidney Diseases, who explained why.

Q: What was the purpose of your study?

A: What I want people to understand is that this is a really basic physiology study. It’s really designed to, under very carefully controlled conditions …. find out what happens to the body metabolically when you make these large changes in diet. In other words, cutting specifically fat or specifically carbs — How does the body adapt to that? At the end of the day, is there any net difference in body fat changes when you make equal calorie cuts?

And what we found was that indeed, if you cut carbs, insulin goes down, fat burning by the body goes up, and you lose fat. Perhaps the most surprising thing was when you cut fat from the diet, nothing happens to the number of fat calories you’re burning, nothing happens to insulin, and in fact, if you look at the difference between the fat eaten and fat burned, both diets led to fat loss, but the reduced-fat diet led to slightly more fat loss.

Q: Wow. How does that happen?

A: You can think of it this way: The low-carb diet did increase fat burning, but it didn’t increase it enough to top the fat loss that resulted from not eating that fat in the first place.

The other interesting thing we saw was that the reduced-carb diet led to a significant decrease in calorie burn compared to when people were eating the baseline diet. The reduced fat diet had no significant effect on calorie burn.

Low Carb Diets: How They Work

A Low-carb Weight Loss Program That Works Like Magic!