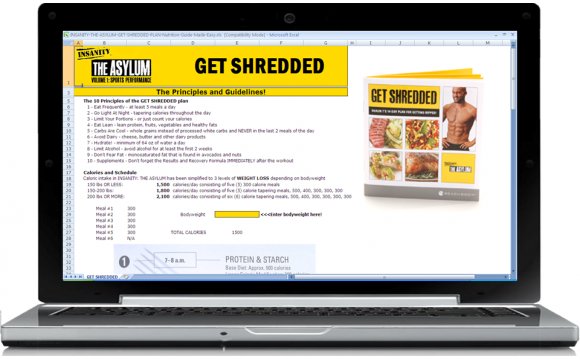 That, in itself, makes some plans not very easy to follow. It doesn't matter what kind of results a plan might be capable of producing - if the average person can't begin to follow it, then it isn't going to be effective.

For example's sake, let's say you follow a somewhat typical off-season bodybuilding diet. You try to eat four to six times per day and try to eat protein with each meal. You drink one or two protein shakes and you lift three to five days per week.

Carbohydrates are not counted and desserts and high-fat foods are not limited. Pizza and burgers are part of your mass-building diet. Your abdominal muscles are not visible, but if you pull down on your stomach skin, you can sort of see one row of abs peeking through. By summer (June or July) you'd like to see a six-pack.

I've seen people start diets in the beginning of January. They know they've added a few pounds of pure fat during the holiday season, and they're fired up to get rid of the excess fat deposits. Monday morning comes around and they make up their own diet and have one grapefruit and a bowl of raisin bran for breakfast. (This is a good start especially since Friday's breakfast was an Egg McMuffin, hashbrowns and a pastry.)

Lunch consists of a hard-boiled egg, 2 slices of melba toast, carrot sticks and a diet soda. Dinner is a huge salad with about one-half cup of ranch dressing. A bedtime snack is a few celery sticks. Day two ends up being much of the same. By day three, many are ready to cave in. The McDonald's drive-thru is just too hard to resist both for breakfast and lunch!

This last person I just described was someone who was making up a diet based on what they "think" a diet should be like. Now, what about the person who reads about someone's incredible 12-week transformation?

That transformer, who eats an astonishing six to seven times per day, even has their very own secret recipes listed in their article. After trying the transformer's secret recipe for frozen oatmeal and sucralose popsicles, the towel is again thrown in, and McDonald's drive-thru is again waiting with open arms.

The moral behind these two situations is to gradually adjust your diet by making small changes. Don't go from eating Snickers bars to carrot sticks (or frozen oatmeal popsicles as the case might be). That's really hard to do. Most people will fail when they try that type of an abrasive switch.

Starting Off On The Right Foot

A typical get-ripped diet will last about 12-16 weeks. That will give you plenty of time to slowly ease into your diet without abruptly changing anything. It's much easier to make a few small changes at a time.

During the first week of following this plan, you need to make sure you eat five to six meals with high-quality protein. Stay with the high-protein meals throughout the whole plan. Next, you eliminate one junk food from your diet. If you eat chocolate or if you drink regular soda, stop. Drink diet soda instead. That's it for week one. Simple, huh?

In week two, you eliminate all burgers and pizza. If you eat at a fast food restaurant, eat a grilled chicken sandwich and don't eat the fries. Order a small side salad with low-cal dressing instead of the fries.

Week three is time to stop eating desserts. Many people love to finish dinner with a tasty dessert. You'll need to eliminate desserts six days per week. Have a dessert or two on Sunday - for a treat.

Week four is salad time. Replace one meal per day with a large lettuce salad. I'd recommend dinner, since a lower carb intake later in the day helps to burn body fat. Any vegetables are fine in the salad; just leave off the croutons, cheese and high-calorie dressings. Eat a grilled chicken breast with the salad.

Week five gets a little tougher. Cardio is introduced. Incorporate three to four 30-minute cardio sessions into your schedule. It doesn't matter what kind of cardio you do. Find something you like. I prefer walking, running or biking outside.

By week six it is possible that you could have lost between five and 10 pounds while maintaining your muscle mass. You shouldn't be feeling too depleted either. To keep the progress going, however, you'll need to step it up a little more. You'll need to start monitoring your carbohydrates more closely.

Along with your five or six high-protein feedings, eat only three servings of complex carbs per day. Oatmeal for breakfast. Rice for lunch. A yam at 3:00 p.m. After eliminating the various foods over the past five weeks, here's what you should be eating:

Follow the same plan for weeks seven through eight.

For weeks 11 and 12, you'll be trying some carb cycling. Basically, you eliminate your carbs for two to three days and then eat higher carbs for a day or two and then repeat the cycle. You keep protein high and eat a few nuts or peanut butter on your low-carb days to keep your calories from dipping too low. Increase cardio to six days per week.

LexFitness: MAKING MACROs - My SHRED Diet, Get Ripped with ...

1 week comp diet! Get shredded for Stereo just for a laugh :)

DIET SECRET to GETTING SHREDDED!