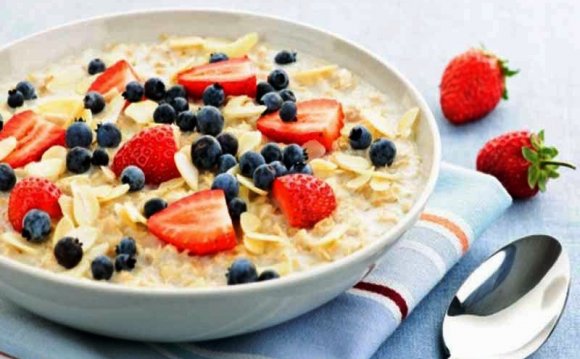 Use these delicious mix-and-match healthy recipes to create your perfect diet plan—one that's free of calorie-counting and hassle. Start with these satisfying base meals, created by Cynthia Sass, R.D., then swap in your favorite ingredients to change things up. All you need to do is satisfy each of five categories of nutrients at every meal. We've given enough substitutions for a one week of meals, but don't stop there—keep going all month long. Pair this with our Bikini Body Countdown workout and you'll be beach-ready in no time!

Heat a skillet over medium. In a small bowl, whisk egg or egg whites and soak bread in mixture. Transfer to the skillet and pour excess egg over the top. Cook until golden brown, flip and cook until second side is browned. Transfer to plate, top with peaches, pecans, and spices.

Variation 1: Pesto Toast With Scrambled Eggs and Peaches
Add cracked black pepper to the egg and scramble over medium-high heat. Toast the bread and top with 1 tablespoon pesto (omit the pecans). Serve with a side of sliced peaches dusted with cinnamon, nutmeg, and cloves.

Variation 2: Open-Faced Egg Sandwich with Peaches
Replace the bread with half a toasted whole-grain English muffin. Top with an egg, cooked sunny-side up. Serve with a side of sliced peaches topped with cinnamon, nutmeg, cloves, and chopped pecans.

Variation 3: Hearty Breakfast Smoothie
Trade the egg for one cup of skim milk. Replace the toast with ¬º cup dry, rolled oats, and the pecans with 2 tablespoons pecan butter. In a blender whip together the milk, oats, pecan butter, peach (remove pit and skin), spices, and a handful of ice. Pour into a glass.

Variation 5: Egg and Avocado Toast With Peaches
Hard-boil the egg. Spread the toasted bread with 1/4 of a ripe Hass avocado (omit the pecans) and top with sliced egg. Serve with a side of the sliced peaches dusted with cinnamon, nutmeg, and cloves.

Variation 6: Ricotta and Peach Toast
Trade the egg for 1/4 cup nonfat ricotta cheese. Toast the bread, spread with ricotta cheese, season with spices, and top with the peach slices and pecans.

In a small bowl, toss tomatoes, quinoa, chicken, and olives with lemon juice and garlic. Spoon mixture evenly into Romaine leaves and serve.

Variation 1: Quinoa and Chicken Salad
Replace the Romaine with 1 cup mixed greens. Whisk lemon juice and garlic with 1 tablespoon balsamic vinegar and toss with the greens and tomato. Pile on a plate and top with quinoa, chicken, and olives.

Variation 2: Cucumber and Tomato Quinoa With Lentils
Replace the Romaine with 3/4 cup sliced cucumber and 1/2 cup minced red onion. Trade the chicken for 1/4 cup cooked lentils and swap the olives for 2 tablespoons sliced walnuts. Whisk lemon juice and garlic with 1 tablespoon balsamic vinegar. Spoon quinoa onto center of plate and top with tomato, cucumber, and onion. Sprinkle lentils and walnuts over the top and drizzle with dressing.

In a bowl, mix chopped apple with lemon juice and cinnamon and microwave on high for 3 to 5 minutes until soft and juicy. Top with oats and walnuts; serve with a glass of milk.

Variation 1: Walnut-Apple Smoothie
Replace the walnuts with 2 tablespoons walnut butter. In a blender, mix together the apple (remove core, seeds, and skin), oats, milk, walnut butter, spices (omit lemon juice), and a handful of ice. Serve in a glass.

Variation 3: Open-Faced Cheese and Apple Sandwich
Replace the oats with 1 slice 100-percentwhole grain bread and trade the milk for 1 ounce smoked Gouda. In a small bowl, toss apple with lemon juice and cinnamon and microwave on high for 3 to 5 minutes until soft and juicy. Top the bread with thin slices of Gouda, the warmed apple, and walnuts.

Variation 4: Cinnamon and Pear Crisp
Replace the apple with a pear and trade walnuts for sliced almonds. In a small bowl, toss the chopped pear with lemon juice and add cinnamon; microwave on high for 3 to 5 minutes until soft and juicy. Top with oats and almonds; serve with a glass of milk.

Variation 5: Creamy Strawberry Swirl
Preheat the oven to 350°. Replace the apple with 1 cup sliced strawberries, trade the milk for 1/2 cup nonfat cottage cheese. Toast the oats on a baking pan in the oven for 3 to 5 minutes until golden brown. Fold the cinnamon into the cottage cheese (omit lemon juice), stir in strawberries, and top with walnuts and the toasted oats.