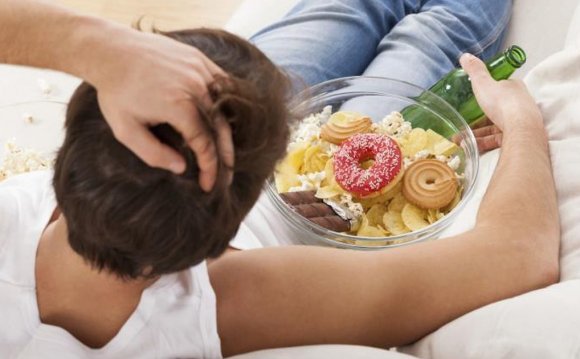 When it comes to optimal nutrition, there are differences between the sexes. Here is a quick summary of the similarities and differences in dietary guidelines for men and women.

A person's caloric requirement depends on body size and exercise level. Sedentary people of both genders will keep their weight stable by taking in about 13 calories per pound of body weight each day. Moderate physical activity boosts this requirement to 16 calories a pound, and vigorous exercise calls for about 18 calories a pound. On average, a moderately active 125-pound woman needs 2, 000 calories a day; a 175-pound guy with a similar exercise pattern needs 2, 800 calories. And like women, men will lose weight only if they burn more calories than they take in.

Despite all the hype about high-protein diets, our protein requirements are really quite modest — only about a third of a gram per pound of body weight. Protein should provide about 15% of a healthy person's daily calories. As a rule of thumb, people of both sexes and any size will do fine with about 60 grams of protein a day. About 8 ounces of chicken or 6 ounces of canned tuna, for example, will more than fit the bill. Excess dietary protein increases calcium loss in the urine, perhaps raising the risk for osteoporosis (more a worry for women) and kidney stones (a particular worry for men).

Carbohydrates should provide 45%–65% of daily calories for men and women. Most of those calories should come from the complex carbohydrates in high-fiber and unrefined foods, such as bran cereal and other whole-grain products, brown rice, beans and other legumes, and many fruits and vegetables. These carbohydrates are digested and absorbed slowly, so they raise the blood sugar gradually and don't trigger a large release of insulin. People who eat lots of these foods have higher HDL ("good") cholesterol levels and a lower risk of obesity, diabetes, and heart disease. Some studies have shown that fiber may help reduce the risk of colon cancer. Men need more fiber than women: 38 vs. 25 grams a day before the age of 50 and 30 vs. 21 grams a day thereafter.

Both men and women should keep their total fat consumption below 30%–35% of daily calories. Since fat is the most calorie-dense food (9 calories per gram), levels as low as 20%–25% are appropriate when weight is an issue.

To achieve these goals, cut down on saturated fat from animal products and certain vegetable foods — palm oil, palm kernel oil, cocoa butter, and coconut. And it's just as important to reduce your consumption of trans fatty acids, the partially hydrogenated vegetable oils found in stick margarine, fried foods, and many commercially baked goods and snack foods.

Make up the difference by including more unsaturated fats in your diet. Monounsaturated fats are healthy for both men and women; olive oil is a good source. The two omega-3 fatty acids found in fish are highly desirable for both sexes. But the vegetable omega-3 found in canola oil and flaxseed oil, alpha-linolenic acid (ALA), is a different matter.

Like the marine omega-3s, ALA is good for the heart. American men and women with diets high in ALA have been found to have a lower risk of dying from cardiovascular disease than people with diets low in ALA. ALA also appears to protect against stroke.

But ALA may not be so good for the prostate. Two Harvard studies have shown that men who consumed the most ALA were 3.4 times more likely to be diagnosed with prostate cancer than those who had the lowest dietary intake. It's still an open question, but there is no question that ALA represents a dietary difference between the sexes.

There are gender differences here, too, but this time women face the dilemma.

In both men and women, low doses of alcohol appear to reduce the risk of heart attacks and certain strokes. For both, larger amounts increase the risk of many ills, including liver disease, high blood pressure, behavioral problems, and premature death. But women face an extra risk: Even low doses of alcohol can raise their risk of breast cancer. So women who choose to drink might be wise to limit themselves to half as much as men.

For most vitamins, the Recommended Daily Allowance (RDA) is the same for men and women. But for some, body size is responsible for slight differences. In any case, a healthy diet will provide plenty of vitamins for everyone, and a daily multivitamin will provide some insurance along with vitamin D that can be hard to get from diet alone.

Calcium is important for women; a high-calcium diet may help lower their risk of osteoporosis. Although it's less common, men can get osteoporosis, too; but there is much less evidence that dietary calcium is protective for men.

Calcium may even be harmful for men, at least in large amounts. The worry is prostate cancer: a high consumption of calcium from food or supplements has been linked to an increased risk of advanced prostate cancer. The risk was greatest in men who got more than 2, 000 mg a day.

What's a man to do? The solution is moderation. Aiming for about 800 mg a day (two-thirds of the RDA) is a safe bet.

There's not much doubt about this one: Women need more iron than men, because they lose iron with each menstrual period. After menopause, of course, the gap closes. The RDA of iron for premenopausal women is 18 mg a day, for men 8 mg. Men should avoid excess iron.