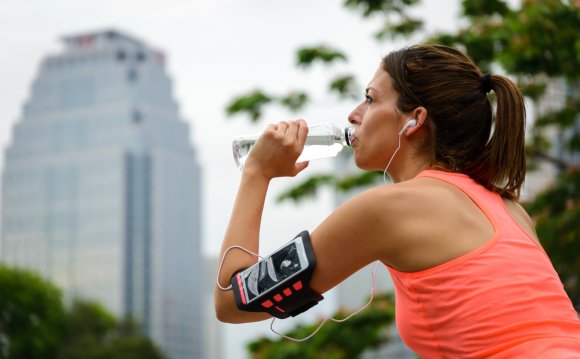 There are usually a few days out of the month when you feel like hell. You run slower, feel achier, and are more likely to skip a workout. “A lot of women finish a hard day and end up flat-on-their-back exhausted, ” says Stacy Sims, Ph.D., exercise physiologist, nutrition scientist, and co-founder of the performance nutrition company Osmo Nutrition. “And your menstrual cycle has a lot to do with it.”

For decades, women—athletes and gym rats alike—have written off these PMS training days as a sacrifice to the fertility gods, but it turns out we have just been eating and refueling the wrong way: We’ve been doing it like men. And our performance has suffered. [Tweet this fact!]

The problem is that the recommendations for pre-, during, and post-exercise fueling are based on studies that use 18- to 22-year-old guys. Unlike men, we have high and low hormone phases throughout the month, during which estrogen and progesterone fluctuate, causing slight changes to metabolism, glycogen, and blood plasma levels, all of which affect performance, recovery, and how hard you can push during a workout. That’s why it’s hard to include women as test subjects. But by not studying females or only looking at us during a low-hormone phase, scientists and experts are only getting half the story.

RELATED: 22 Men's Exercises Women Should Do

Sims became interested in performance nutrition when she was an Ironman triathlete and elite cyclist, and decided to base her Ph.D. on women-specific thermoregulation (the body’s ability to maintain core temperature) since there was so little research on it. She took a job at the human performance lab at Stanford University, eventually becoming an expert in thermoregulation, hydration, and performance nutrition, and working as a nutrition consultant with ProTour cycling teams, Olympic athletes like cyclists Kristin Armstrong and Evelyn Stevens, and several elite triathletes.

“Women aren’t textbooks, ” Sims says. “The idea was to find out how the rise and fall of estrogen and progesterone affects our bodies outside of reproduction.”

We go through two phases during a menstrual cycle: the low-hormone follicular phase (from day 1 when your period starts and continuing through ovulation) and the high-hormone luteal phase (from day 14 after ovulation and continuing to your next period). During the luteal phase, progesterone increases your core temperature and also causes your body to lose sodium, which is amplified by the fact that we have lower water content than men. Abnormally low sodium levels in the blood can lead to hyponatremia, which causes cramps, headaches, vomiting, and other I-just-wanna-curl-up-on-the-couch bodily functions. And then estrogen and progesterone cause the blood plasma level to drop 8 percent, making it thicker, fatiguing muscles faster, and lessening tolerance to working out in the heat.

Our post-workout recovery is different too. A study in Medicine and Science in Sports and Exercise found that women oxidize more lipids and fewer carbohydrates and protein than men during endurance exercise like running, cycling, and swimming. Because we burn fat more efficiently, we can go harder for longer without needing to eat as many carbs on long runs and the like. According to Sims, women need about 45 to 55 grams (g) of carbs per hour—the amount in one bagel—whereas men need closer to 65 to 80g per hour. The difference could mean fewer GI issues during a marathon when it’s easy to overdo your carb intake and improved performance. And this fueling advice isn’t just for endurance athletes—it applies to strength training and gym workouts too.

Sports Nutrition for Teenagers - Rowers and All Athletes