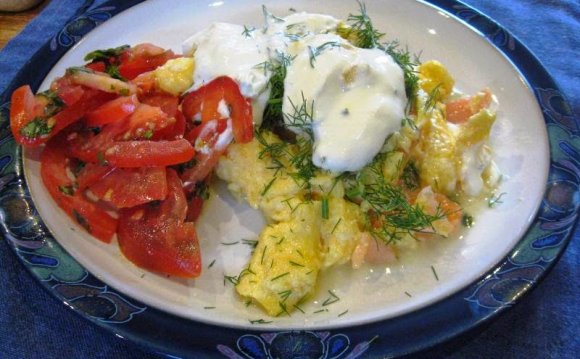 When one takes in very little carbohydrates, the body begins to change its hormonal environment with a decrease in circulating levels of insulin and increasing levels of glucagon. This enhances the bodies ability to use gluconeogenesis (producing glucose from sources other than glycogen) as a way to derive fuel.

Normally, in the fed state, Acetyl CoA formed during B-oxidation of fatty acids is oxidized to form O2 and H2O in the citric acid cycle. When carbohydrates are not present however, the liver accelerates fatty acid breakdown, and ketone bodies are produced instead as a fuel source.

These then flow to the brain where they will become a fuel source, and a very good one at that. In fact, 100 grams of ketone bodies can produce around 10 kg of ATP, whereas 100 grams of glucose only produces 8.7 kg.

Also, because of the lowered insulin levels, the glucose that is used by tissues outside of the brain is only partially broken down into pyruvate and lactate which can then be recycled by the liver through gluconeogenesis.

These types of diets have been noted to produce a great deal of fat loss and even an increase of lean muscle tissue in some individuals, thought to be due to the elevated B-hydroxybutyrate concentration preventing catabolism of lean tissue. This is one reason these diets are becoming so popular amongst the bodybuilding and fitness crowd.

Diabetics are also another population that is very concerned about the formation of ketones in their bodies. When diabetics detect ketones in their urine, this is a signal that their diabetic condition is not being controlled properly.

Their bodies, since they are unable to handle sugar properly, produce vast quantities of ketones and risk going into a state of ketoacidosis.

This is a life threatening condition for the individuals and if not treated promptly can become very serious very fast.

With normal individuals however, who are undergoing a low carbohydrate diet, the production of ketone bodies is in a controlled environment and does not pose any serious health risks.

This state is normally known as dietary ketosis and the blood stays within an acceptable pH that can be buffered by the body.

Furthermore, it appears as though there is no clear direct requirement for carbohydrates in the human body. The current carbohydrate recommendations are based on preventing ketosis and providing glucose beyond minimal needs (Manninen, 2004).

In reality however, it appears as though ketosis is not harmful unless it progresses to that of the levels of diabetics as described above. This means that for those who are considering a low carbohydrate diet, they should not be overly concerned about the development of ketone bodies as no studies have clearly demonstrated any harm from this state.

Many nutritionists do not recommend low carbohydrate diets, as they claim carbohydrates to be an essential nutrient.

The body is highly adaptive however, and in most people can adapt to a carbohydrate free diet and produce necessary glucose through other means (ketones).

Another reason why most nutritionists will not recommend a low carbohydrate diet is because they are often associated with diets that are high in fat.

This will indeed put a person at risk for other diseases such as heart disease and hypertension, however with properly chosen foods, this risk is severely reduced.

Common belief is that insulin is needed for the uptake of glucose and the only way to produce insulin is through the consumption of carbohydrates.

Contrary to this belief however, there is enough glucose transporters in the body at any given time to fully meet the needs of glucose uptake to satisfy respiration requirements, even without the effect of insulin (Manninen, 2004).

Insulin will of course increase these transporters, but the body will never be completely dependant on insulin for this process.

So, if you are considering a low carbohydrate diet, be aware that there may be some drawbacks to it. You may experience slightly lowered energy levels due to the fact that the body's fastest producing energy stores do come from carbohydrates. Your metabolism will also have to go through a somewhat more lengthy process to derive energy.

However, if you are looking to burn some bodyfat, or reduce your risk for some disease conditions, this may be a very good diet option for you. Just be sure to plan your foods wisely, so as not to increase the saturated fat component and put yourself at risk for a number of other disease conditions.

Is a Very Low-Carb or Ketogenic Diet Better for Fat Loss?